The zero pill, zero dollar guide to ending bloating and gas.
Thank you! Your Guide is on its way!
Oops! Something went wrong while submitting the form.

Go from feeling bloated, gaseous, and uncomfortable to loving how your gut looks and feels by treating SIBO.

You exercise and eat healthy, let that show when you’re no longer bloated.

Feeling full before you start a meal takes the fun out of eating.

Have a long list of foods that you can’t eat or give you symptoms? It may not be the foods.
Free Bloating and Gas Guide 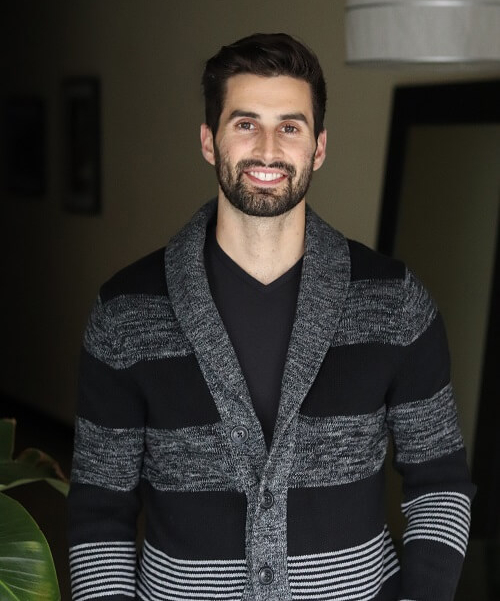 After working in various pharmacist positions for over a decade, Dan realized that many of his patients who took their medications “perfectly” were still worsening in their conditions. He also noticed that by doing traditional pharmacy work, he wasn’t changing patients’ lives like he hoped to. In addition, Dan struggled with bloating and gas of his own for years. He hated his bloating the most for various reasons, including looking worse with his shirt off, not looking forward to eating, and brain fog which resulted from having a constantly “full” feeling stomach. Not a single diet or food elimination seemed to make a difference. His doctors always indicated that his lab work looked “normal,” suggested he take some Gas-Ex, and dismissed his concerns as simply part of life. Dan even started to think “is this just how it is.”

After treating his SIBO naturally using a functional medicine approach (without antibiotics), his bloating and gas were practically gone, and remain gone to this day. The increased self-confidence in body image, re-discovered joy of eating, and mental clarity from not being bloated were a truly life-changing experience. This allowed Dan to feel his best for the first time in years. Dan’s mission is to help others resolve their SIBO and gut issues, so they may also experience looking and feeling their best.

Corey
"I have been dealing with bowel movement issues for most of my life. Especially when I travel. Whenever I have even the slightest amount of stress in my life it feels like my digestive system goes on a complete halt. No amount of coffee in the world would get my bowels moving in a healthy fashion. Then I met Dan. He literally incorporated one additional food into my diet and despite the fact that I have been traveling more this year than I have in my entire life, I am offically a 1 bowel movement a day kind of guy. Couldn't say enough good things about Dan and his knowledge of gut health.
Jenna V
"Working with Dan was the best decision I’ve ever made for my health. After years of struggling to get quality sleep and trying countless different solutions on my own, Dan created a personalized plan of healthy supplements and lifestyle changes that came together perfectly and gave me the most consistent, quality sleep I’ve ever gotten. Dan made a special effort to create a plan that works with my lifestyle and that I’ll easily be able to maintain long term. Getting the proper rest my body needs allows me to get the most out of my life, from my work day to my workouts, and allows me to live my best life."
Arlene
"Running away from my home country due to a permanent protection order with 2 kids surely has left its scars on me for the past 17 years. Through the years I worked 2-3 jobs as a RN, leader/Director of Nursing and raised 2 kids singlehandedly. I lacked sleep, continued to gain weight, different parts of my body hurt (including aching in my arms and hands from carpal tunnel), was exhausted, and had no energy. Most of all, I was alone emotionally in all these circumstances.  I met Dan and asked him for help. Now I find myself sleeping soundly with an incredible refreshed feeling all day long.  I’m pain free from carpal tunnel syndrome/arthritis, happier and more relaxed, and enjoying life to the fullest. I no longer need my blood pressure medication.  I continue to learn more about weight management, gut healing, quality supplements, and strategies for living a healthy life.  Dan’s overall impact paved the way for more self-care habits, knowing there is someone who truly cares for you as a person."
Jim
"It has been several months since I implemented many of your recommendations and I must say I feel great, at age 68, and notice less trips to the bathroom during the day and night allowing for better less interrupted sleep as well. I am following your recommendations on reducing inflammation, for example, by taking Omega 3 fish oil, Turmeric, green tea, and yes working on the single ingredient foods, of course with a long way to go in this area. I am making sure that what I implement I enjoy and have a sense of satisfaction in doing so, and that I know I can sustain the healthy habit change and not feel like I’m forcing myself to do so. Even though I have a long way to go even sometimes getting off-track, you have instilled in me the awareness and mental initiative and discipline to strive for healthier choices while eliminating or at least reducing the non-healthy choices."
Andrew S
Deb S
Deb
Maxime

3 Steps for Resolving Your Bloating, Gas, And Confusion Over Not Knowing Which Foods Are "Safe"

We'll do a full assessment of your health history and available labs to determine where you currently are, and what the best course of action is to accomplish your specific health goals.

You'll focus on integrating your individualized plan into your life so you're only doing the necessary things to accomplish your health goals and minimize your SIBO symptoms.

We'll track your progress & make the necessary adjustments as we go based on your personal experience. you'll continue this until you no longer have unwanted SIBO-associated symptoms you currently experience.

Receive a 30 minute call from us to have your questions answered and determine if you are a candidate to work with Dan.

Thank you! Your message has been received.

We'll get back to you as soon as possible.
Oops! Something went wrong while submitting the form.
Copyright © 2022, Designed by Corey Hiben
AboutTestimonialsContactPricing & FAQPrivacy PolicyTerms & Conditions